Everyone’s names are spelled wrong. It’s okay though and we’re working on getting in to that mindset. I’m thinking that if I’m telling everyone they are the world’s best improviser, I should tell myself that I’m the world’s best teacher. That’s my theory and a pretty decent summery of the class as a whole. You are the best; all you have to do is NOT STOP. We’ve got medals around our necks and we haven’t even tried. The class starts outside and it’s beautiful and sunny, we are pivoting our circle to tan on all sides. We’re talking like killers, mirroring our faces, and calling it warm ups. I’m forgetting everything I wanted to say. I wanted it to sound philosophical, but it came out “this will be awkward”.

We’re drawn to a church just a block away on a hunch. We need a door but find an angel and every time we circle it we are changing. Changing characters. The best is when we’re quoting films instead of playing characters because it’s so not the point that it’s hilarious. The last character is the best though, because it’s painfully honest and ends itself. Our shoes are soaked and we move again.

I’m telling everyone “look for crows! That’s the universe reminding us of the rules! Character! Relationship Objective! Where!” but we don’t see any all day. Instead we find this hissing seagull in an air vent and we can’t believe it. We don’t believe it.

It’s impossible to shop without talking about shopping. So instead we try and talk about snow. It’s really hard though, really hard and I think I cheat. I say I need a toothbrush. That’s what I buy, but the variety of others is beautiful: Ziploc bags, incense, mega millions. We take them all and make the least funny jokes ever. We take a parking lot elevator all together to the top floor and all our jokes are blowing away up there.

We’re practicing being strangers in a cargo container, but there’s a real stranger and he’s making it hard. He wants to talk to us about the bible. We want to reminisce about high school. I’m yelling “You can’t be wrong! Nothing’s wrong! This seagull and stranger aren’t wrong and neither are you!” And I’m believing it, and feeling like the class is working. We could have done nothing and that would have been right. I didn’t feel like I was in any position to teach people to surrender, but I am and they are too. We surrender. We wave our white flags as we get all the game show answers wrong. 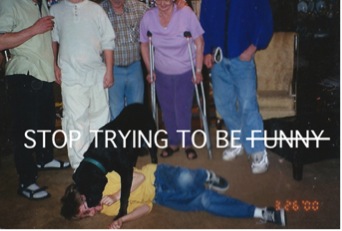 STOP TRYING TO BE FUNNY WORKSHOP WITH GRAHAM DOWNING

Setting off from the Wild Times installation at the Frye Art Museum, participants cleanse their typical routine by moving through the city using instinctive feelings, laughter, and psycho-geography. Along the way, the group will stop for specific improvised exercises that further enforce the concepts of letting go and “un-planning.” Routines are the chains that restrict wild instinct! Come prepared for walking two miles and unexpected weather.